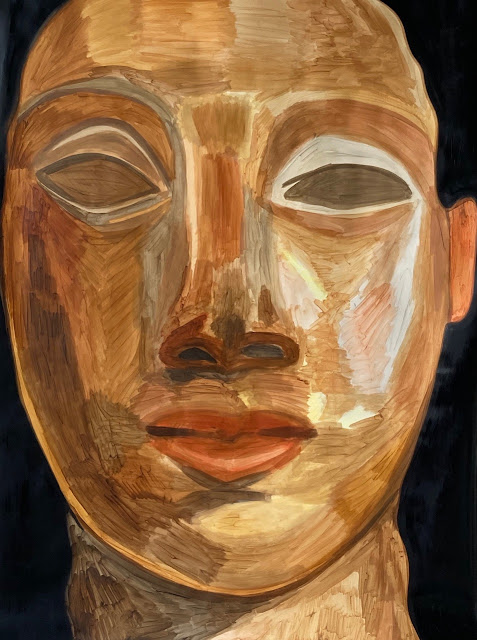 You are looking at a painting of a polychromos sculpture; the missing colour of the Greek marble statue has been re-imagined in this portrait. The colour on the sculpture is closer to the truth than the white marble. We are in Archaic Greece, some 3,000 years ago. A group of young sculptors-in-training travel to Egypt to learn the trade, and they bring the Egyptian style of sculptures with them to Greece. The typically large Egyptian sculptures with a rigid stance have become more flexible, rounded and human in Greece. Egyptian art is made for eternity and Greek art is made to be seen among people, in the midst of life. The Archaic smile that brings the sculpture to life attracted me. This smile is often found in my paintings. I draw inspiration from Herbert von Buttlar's 1950 book "Griechische Köpfe,". The peplos korè is a freestanding statue carved in stone. The korè statue represents a young woman who died before she could be given away in marriage. Korè means "daughter," and the statue is a funerary monument that greets the living along the access road to the city or to a temple. No two korè statues are alike, and each has individual characteristics in style, posture, dress and face. They are not depicted naked but wear a beautifully decorated colourful peplos, a wool robe. Greek statues were always painted. The white marble statue is the substructure, and without paint it is incomplete. Colour was expensive, and a statue richly decorated with lots of colour showed that a korè belonged to a wealthy family. The statues that stood in the open lost their colour, but those that were excavated have mostly been able to retain the colour. After the Persian War in 480 BCE, many of these statues were buried in the sacred ground of the Acropolis, where they were excavated in the 19th century. 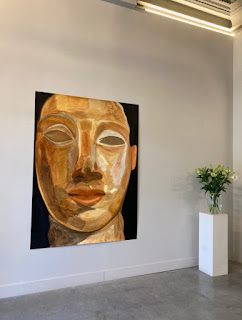 The korè statues were made in a transition period from an ancient Eastern culture to a new Western culture. In the East, women had important roles such as amazons, priestesses, and goddesses who watched over women's health. In ancient times Greek culture changed from East to West within the same geographical place. The mythical stories do away with the old Eastern influences to make way for a new form of thinking. In the 6th century BCE Greece changed towards democracy, patriarchy, money with coins minted by polis, laws written down and the slave trade was an essential part of the economy in the Athenian empire during the Attic-Delian League. Slavery was an economy model, every family owned slaves to do the work for them. Athens had slaves in the silver mines and in the administration, working for the men who invented the foundations of European philosophy, arts and sciences. Along with these new thinkers came the new myths tailored to the new society. For example, Athena is born from the head of Zeus, a woman who comes into the world immaculate. Athena with her owl is a woman conceived by men: she is heroic, has a helmet and spear, and is not afraid to go to war. The opposite is the much older titan Medusa, a woman who can turn people into stones by just looking at them. The animal worshipping Medusa was transformed from the Eastern style of Potnia Theron and Ishtar into an ugly monster that wouldn't listen to reason and was murdered by Perseus. 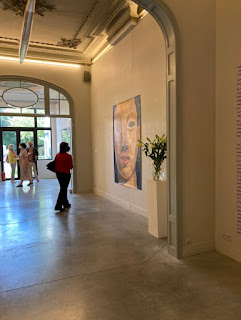 The clear eyed, divine and warlike Athena also stands in stark contrast to the korè. The real korè, as a daughter, lives at home with her parents in ancient Greece and witnesses a culture where women have no voice. Women literally had to remain silent. They are not allowed in the agora. They must stay in the house except to fetch water or clean the family tomb. In public, they must be veiled. Their work consisted of weaving and taking care of the children. Only priestesses and prostitutes are allowed to participate in public festivities and they have a little bit more freedom. Women are not allowed to study, they are not allowed to attend symposia, they are not allowed to speak up in public, and men are not encouraged to speak about their wives either so that every trace of their voices disappears. These women have nothing to decide for themselves and are under the guardianship of their father, husband or brother.

On April 24, 1921, women were allowed to vote for the first time in Belgium, giving them their own voice in our democracy. The equal right to vote for women dates back to 1948, when they were given the same right to vote as men.

A text to go with the painting 'Portrait of a Korè' made in 2021 for WARP, exhibited in Madonna's Web. 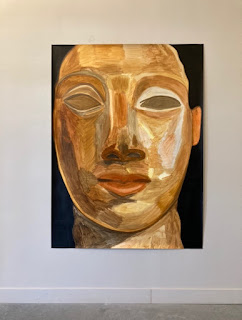