On the impossible nature of painting: the Robbie series.

I paint portraits of women. The Robbie series is an exception on my usual subject, and it was difficult. This colourful painting at the top was the first and those that follow show the artistic progress towards a final portrait of Robbie Snelders.

I decided to let go of anything that secured me in the past and see where a painting would take me. Many portraits turned out terrible and I had to throw them away. This one has a nice touch and colour, but the face seems very odd.


Quite soon I figured out to paint against the image, to work against the portrait and add a layer, here visible as a pale relfection of light. The difference between the portrait as it was and with this added layer is slightly irritating.


I don't want to resolve to tricks, expressive and creative sollutions only work for me if they work with the image and not hide it. With every new portrait I had to start from nothing and rebuild it while trying to find out what works and what doesn't.


These series became a testimony of the failure, the ineptitude of my painting becomes visible.


'Nice' is not what I was looking for, I wanted to preserve something of the Robbie as I knew him, but this was slipping away with every clumsy attempt.


Sometimes a painting would come out victoriously, strong and fragile and everything fits in the right place. This was exceptional.


The daily fight was between 'good' and 'interesting', while I failed on every account.


Painting is a battle ground, nothing really comes easy: it took me ten years to use the colours I like, how much longer for the images I like?


I paint against everything I know about painting, against all the truths and advice on how to paint. Every day I started again from the memory of Robbie, but you don't remember a face as a whole. Instead you see the details, eyelashes, a contour, etc.


Until you don't paint a face, but only parts of it while it doesn't matter where you put them.


Ever so slightly, Robbie was falling apart and what remained was a painting quite a bit more interesting.


It doesn't really matter how you paint someone, how many noses and eyes and mouths and ears there are. In the end the paint on the canvas is only a resemblance, a concept of who you try to remember.


I felt as if I just discovered the universe, a sky above the sky, a looking glass that leads back into the real world.


I finished the series with a new approach on painting, and looking back it seems so simple, almost easy.
Posted by Eline De Clercq No comments: 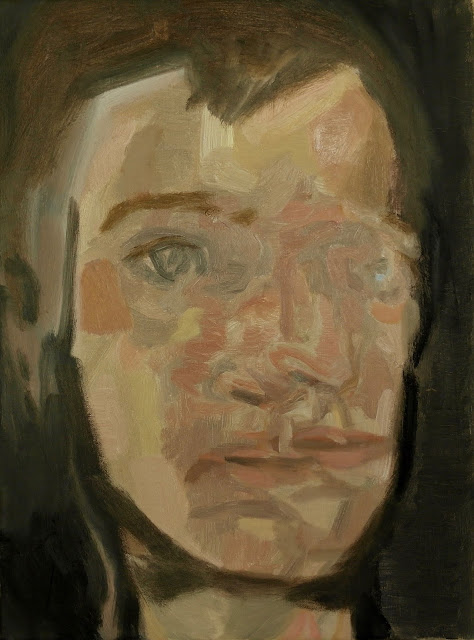 This is the portrait of Robbie Snelders, what I paint is not how someone looks, but how I look at someone. It is the unraveling of an image.
Posted by Eline De Clercq No comments: